Blue Eyed Dream GF's pink skin and blue eyes were characteristics of the cremello color. A cremello has two dilution genes, which lighten the hair, skin, and eyes. Blue Eyed Dream GF would only pass on one cream gene to his offspring, so he would NOT reproduce pink skin or blue eyed foals when bred to non-dilute mares (chestnuts, bays, blacks).

When bred to a chestnut, he would produce palominos 100% of the time.

When bred to a bay, the foal would be palomino or buckskin (or rarer smoky black).

As a cremello, he would always pass on one dilution gene, so color is guaranteed. Note, however, that when bred to a gray mare, the resulting foal could have inherited the gray gene and turn gray.

The only way Blue Eyed Dream GF could have produced a double dilute foal (cremello or perlino) would be if he was bred to a mare with a cream gene, and both parents pass that gene to the foal.

He was approved for breeding with the German Oldenburg Verbrand(GOV) and the American Warmblood Registry.

In September of 2015 Blue Eyed Dream GF passed away.

Dream was ranked #13 for the 2014 Intermediare-1 USDF Horse of the Year award! 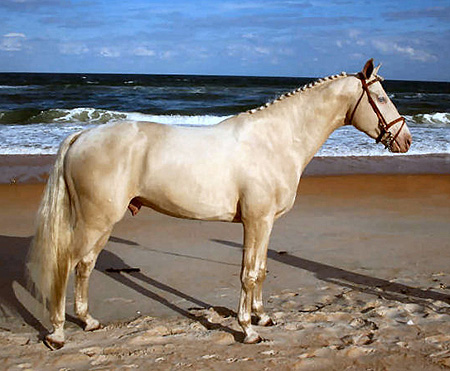 Fastest in 5 out of 6 hazards